HAPPY BOOK BIRTHDAY to these middle grade books making their rounds through our reviewers!

Thank you to @kidlitexchange for providing the review copies of these books. All opinions are our own. 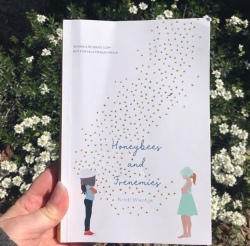 Photo and Review by Michelle ~ originally on Instagram @mleonardwrites

It’s the summer before eighth grade, & Flor’s got plenty of reasons to be unhappy. She’s stuck in Honeydale, Ohio working at her family’s mattress store wearing a mattress costume outside in the heat & being pestered by her older sister. Even more troubling, the store’s not making much money, causing her parents to argue a lot. Just when it seems things can’t get any worse, her BFF heads to band camp & Flor is asked to compete in the 50th Anniversary Honey Festival reunion pageant. Flor was crowned Little Miss Honeybee back in third grade, & her former friend, Candice, was runner-up & has held a forever grudge ever since.
🐝
If Flor can win the reunion pageant, the prize money might be enough to keep the mattress store running so they won’t have to move to New Jersey where her grandparents live. But then, the pageant director decides Flor & Candice should work together as a team. When they’re asked to help the cantankerous Mr. Henry as part of their community service, Flor gets a grand idea to use his bees for the talent competition. Can these two arch enemies find a way to work together & soften the world’s grumpiest man so they can win the pageant?
🐝
Hair seems to be a theme in Kristi Wientge’s books. In her debut, KARMA KHULLAR’S MUSTACHE, Karma is desperate to get rid of the 17 hairs growing above her upper lip. In HONEYBEES AND FRENEMIES, Flor wants to grow a beard! I’ll leave it for you to read to find out what kind!
🐝
Verdict: HONEYBEES AND FRENEMIES has an authentic middle-grade voice, full of funny one-liners & heartfelt whispers that will speak to readers. With the push & pull of friendships & family struggles, the story reminds me of my favorite Judy Blume books. Tweens will definitely relate to the tough issues Flor faces, dealing with grumpy sisters, frenemies, & worries about parents fighting over money & having to move. Loved the chapter headings with fun facts about bees &great information throughout about beekeeping & the medical applications or bees/honey!
🐝

THE BOOK CASE – by Dave Shelton 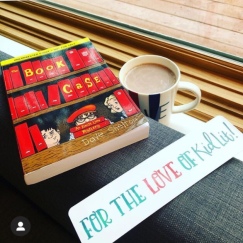 Photo and Review by Shan ~ originally on Instagram @shansalterwrites

Get ready to step into a world of mystery, crumbling surrounds, and boarding school tribulations! Dave Shelton weaves a vivid picture of life at St Rita’s School for Spirited Girls through his use of descriptive language and brilliant, detailed sketches. The main characters, especially Emily Lime, jump off the page and the mystery they must solve is intriguing and suitably complex.
Younger/less experienced readers may find the story a little hard to follow at times and the reading level challenging in parts but the older, more experienced readers in the 8-12-year-old subset should not have any trouble. This is a fun read for mystery lovers and should do well as a series. 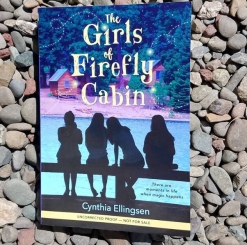 Photo and Review by Kate ~ originally on Instagram @kateteaching7and8

This is a beautiful story of friendship. The only thing that Lauren, Isla, Jade, and Archer have in common is that they will all be staying in the Firefly cabin at Blueberry Pine Camp for Girls. Lauren is an orphan who has grown up in a series of foster homes and won an essay contest and scholarship allowing her to attend the camp. Her goal: to have the best summer of her life and to become best friends for life with her cabin mates. She wants to remember every moment of camp, so when a contest to become the new face of the camp’s website is announced, Lauren is determined to win. At first the girls don’t seem to get along at all, but through her enthusiasm and genuine kindness, Lauren pulls the cabin together. Throughout the story, we discover that each girl is struggling with their own issues unbeknownst to the other campers: Lauren is an orphan, Archer is having trouble with her sister, Isla struggles with living up to her family’s expectations of perfection, and Jade just lost her lifetime best friend. In the course of the summer, the girls each deal with their individual issues and grow into better people through the power of friendship.

I really enjoyed this novel. The story was inviting and sweet. The chapters alternate between the points of view of the four girls giving you a deeper insight into each character. The book sends a wonderful message about friendship and remembering that everyone has their own problems, even if their life appears perfect on the outside. This is a terrific and fun middle grades novel that will make a great addition to a classroom, school, or individual library. 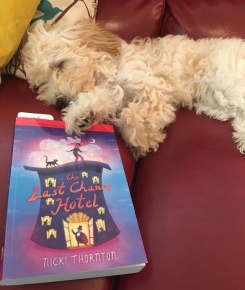 Photo and Review by Melissa ~ originally on Instagram @mllittleauthor

This rollicking, fantasy-filled mystery is like Harry Potter meets The Westing Game. Seth, a young, orphaned kitchen boy at a strange hotel in the middle of nowhere, finds himself in the midst of a murder mystery when magical characters convene at the hotel—in fact, not only in the midst of it, but accused. To clear his name, Seth will have to rely on his talking cat, a secret book, and his new knowledge of the magical world just beyond his own.

The descriptions in this book are detailed and absorbing and the large cast of magical characters are each different enough to keep from being confusing. I had fun trying to guess the murderer right along with Seth, and I’m proud to say I narrowed it down to two possible suspects and *somewhat* got it right. Can you do even better than I did?

SECRETS OF A FANGIRL – by Erin Dionne 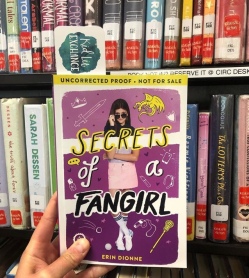 Photo and Review by Laura ~ originally on Instagram @librarianmsg

If you’re looking for a super fun read that also addresses bullying, being yourself and misogyny, this might be it. Secrets of a Fangirl is a solid book about the trials of middle school friendships and the struggle of maintaining popularity when you have an inner geek trying to escape. Sarah Anne is obsessed with the MK Nightshade series and knows it so well that she’s been invited to partake in an interactive online contest to determine the ultimate fan. Unfortunately, her best friend thinks MK Nightshade is super uncool so Sarah Anne has to hide her passion. She also has to wear her hair specific ways on certain days, stick to her color palette and go to the school dance with a boy she doesn’t like. Or does she? It’s fun seeing Sarah Anne realize that maybe she doesn’t have to compromise who she truly is and maybe she’ll be happier if she lets her geek flag fly free.
〰️
Extremely relatable, fun to read and QUICK – I definitely recommend this fun book! It’s a 4 ⭐️ read for me (things get a little wacky at the end), but I know a bunch of kids who are going to looooooove it. Get this one for kids in grades 4 – 7.

Photo and Review by  Susan ~ originally on Instagram @redcanoereader

When I received this book, I immediately noticed author, Jason Reynolds, quote on the front of the book. “This is a necessary story. We’re lucky to have it in our world.” After reading this moving MG book, I so agree. 🌼

Jude lives in Syria with her Mama, Baba and her older brother. It’s the only home she’s ever known and it’s always been a happy one. But now the fighting is getting closer and closer, her brother has moved out to join the freedom fighters and her mama is pregnant. It’s decided that she and Mama will go to America to live with her uncle’s family. They move into her uncle’s 100 year old house on a tree lined street in Cincinnati with her uncle who is a doctor, her aunt who loves to garden and create healthy meals and her less than friendly cousin. Her aunt and uncle offer them a warm welcome, but her cousin Sarah, would rather they not be there at all. 🌼

This story, which is beautifully told in verse, offers a true glimpse into the world of an immigrant. You see the world through Jude’s eyes as she navigates the halls of her new middle school, struggles to understand the American colloquialisms she constantly hears and feels an overwhelming loneliness. You begin to understand the haven of the ESL classroom where she finds other kids, who like her, are doing their best to learn not only English but also the customs of American preteens. And as the weeks and months pass by, you understand Jude’s confusion when she feels not only love for her new home, but also an aching yearning for the people and world she left behind.
🌼
This is such an important #windowsandmirrors book, not only for MG students, but for ALL of us. It is one that needs to be on the shelf of every elementary and middle school library. PLEASE add it to your order list, right now! 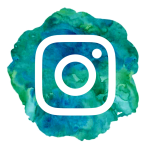 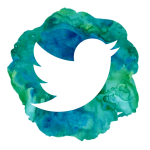